Tunisian air ambulance charter service is one of the most attentive service provided by Plures. We are transporting sick and injured passengers to/from Tunisia, one of the closest North African country to the Europe and transport to other continents and countries as well.

With our vehicles equipped with world standards and experienced flight crew, your relatives are in safe hands. We serve patients with two types of aircraft in the transfer. These are: relatively for short-range more economical propeller-driven aircrafts and jet aircrafts usually used in long-haul flights. All aircrafts are tested and regularly maintaned. 7 days / 24 hours , our company can provide air ambulance service to Tunisia, as well as expert crew of the plane, one doctor and one paramedic will keep your patient under supervision. However, with the patient, the possibility of companion up to 2 people given.

Tunisia gained independence in 1956, it is neighboring with Libya and Algeria. With 10.5 million inhabitants, it is the smallest country in North Africa. He official language of the country is Arabic, most of the people can spaek French beside Arabic. Arabs constitute more than 95% of the country. With a mix of Andalusia, Europe, African and Arab culture, since gaining independence, they take Turkey as model. In addition, citizens of Turkey can go to Tunisia without visa. The capital of Tunisia, Tunis, has a population of around 2 million.

With a history dating back to 1100 BC, Phoenician, Roman, Byzantine, Arab States and the Ottoman Empire ruled the country. After the Arab Spring in 2011, a policy to a more liberal political regime has progressed towards democracy.

In Tunisia, it is possible to say, Mediterranean climate is dominant. Summers are hot and dry, winters are mild and rainy, more or less depending on the region. Degree does not fall below 0 in winter and in summer rises up to 40 ° C.

Traditional cuisine of Tunisia, is well known for its mainly protein consisting foods. Brique is a dish cooked with egg inside and fried. This is one of the first menu traditionally cooked for groom, when he first visits the girls family. Groom candidate, if successfully, without pouring, eats the Brique, he would have proved to be ready to assume the responsibility of a family. Harrissa is a bitter sauce, special to Tunisia. The Tajin is a dish which is similar to our other traditional dish mücver. Ojja is a spicy food, prepared with scrambled eggs, tomatoes, green pepper, lamb or mutton, and harissa sauce. Also, after the lunch and dinner, they frequently drink mint tea in Tunisia.

Tourism, Culture and the Art

Hammamet is the first city which started international tourism in Tunisia. With the opening of the hotels in the 1960s, tourism revenues and the number of tourists increased day by day. Hammamet is a touristic city, it offers the clean water of the Mediterranean and clean air. It is also possible to see the authentic buildings of Hammamet. It is only an hour away from capital city Tunis.

Yasmine Hammamet is Tunisia's most important holiday destination. The name of this town has derived from jasmine flowers that identified with Tunisia. With in 4 kilometers coast line, there are more than 40 luxirous hotels and there are many activities at " Medina". "Medina" is the name given to the area of the old town. In Tunisia and North Africa many of these Medinas can be found. The area is often surrounded by walls and narrow streets are closed to vehicle traffic. Medinas are structures that host many shops, bazaar and souvenir shops. The shops and the bazaar market in Medina is called "SOUQ" in general. Tables made of mosaic and tiles which is unique for Tunisia are avail conveniently in the souq.

Carthage is one of Tunisia's historical cities used by the Phoenicians of as a port city. But during the colonial period, many of the ruins of Carthage city was taken to European museums. In Tunisia, the city has a combination of old and new structures. Thus it creates a beautiful harmony with contrasting worlds. It is possible to see the shops in the old markets of Tunis dealing with handcrafts. The old market is built around the Zeytuniye mosque, this mosque is one of the oldest buildings of the city of Tunis. Mosque was built in the 8th century. Another important tourist center of Tunisia is a town named Sidi Bou Said. This town is about 20 kilometers from the capital, is built on a hillside on the edge of the Mediterranean. It will not be an exaggeration to say for this town "Tunisia's finest tourist center". This city has been a source of inspiration to many French painter and musician. Many European artists' houses they live in the past, are still well- kept. The doors in this town are famous for its spectacularly beautiful carvings which are different almost at every door and all the doors in this town is blue. In addition, Tunisia has made significant investments in golf. The Doors seen all over Tunisia, are traditional symbols of the country. The Carthage Film Festival is held in every two years in Tunisia. This festival is organized by the Tunisian government. During the years film festival not organized Carthage Theatre Festival is done.

Not only for accidents, injuries, situations that require emergency, but for intervention to patients has to be treated in better conditions, you can also reach us on our mobile support line, without losing time, can learn the details of the service. Plures Air does not just transfers your patients. Also organizes the entire transport process, gets international permits, ground transfers, hospital registrations are done on your behalf.

With its expert flight crew and medical team during the flight and with coordination team on ground our company will not leave you alone at your crucial day, offering the most economical fare and the most exclusive services. For getting Plures' air ambulance service to Tunisia, you can call our free hotline 7/24 and can get more information. 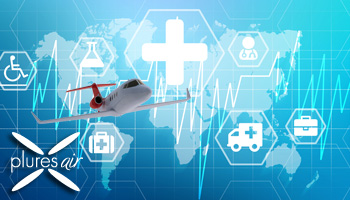 China air ambulance charter service is one of the most attentive service provided by Plures.