With our Moscow air ambulance rental service, we give healthy, safe and jet speed service. No matter where in the world, it makes no difference to Plures. Our company always knows to make even the most remote places closer, bringing the service to the Russian capital, offers an excellent health transport solutions that.

With Moscow air ambulance rental service in Turkey or wherever you are in Russia the Plures is with you. Always ready for an operation with experts and medical teams our company continues to work with the appropriate medical tools of the modern age. With our intensive care equipped international standard air ambulances, in Moscow-based service network, sick and wounded are delivered to a full-fledged hospital.

Our company with its fully equipped aircrafts even in the most inclement weather conditions, without disturbing the patient is going to reach the health center. Plures, will send staff required by the condition of the patients with air ambulance to the region, as soon as possible first aid will be done to the patient.

Our company, with Moscow-based air ambulance rental service, going beyond the conventional understanding, serves every country in the world. Like other services offered by our company, at this service also, the most important thing is the expression of satisfaction on the customer's face. Plures, with the ambulance jet aircraft rental service, fulfilling the advance promises, gives importance to time. If you are experiencing health problems in Moscow, Plures will be your best solution. Moscow air ambulance charter service is carried out in a smooth way through our company.

The capital city of the Russian Federation has approximately 12 million inhabitants. Moscow city, is one of the world's most expensive cities. Moscow is the city with the most billionaires live in the world. More than 90% of the population is Russian. It has 77 sister cities, from our country; Adana, Alanya and Izmir are sister cities of Moscow. Moscow is a city that can be visited without a visa.

Russian Federation was U.S.S.R. till 1991. Before that until 1917, it was called the Russian Empire. Previously it was Tsarist Russia. During all this period, Moscow witnessed; revolutions, riots to death, all the political and social events. The city was founded in 1755. After the Russian Revolution of 1917, in 12 March 1918 became the capital of the Russian Soviet Federative Socialist Republic. Later, the city was the capital of the USSR, Russia is the capital today.

Which has a temperate continental climate, the air temperature in winter also can drop to -20 degrees in the city. But it is between -5 to -10 degrees under normal conditions. In the summer, the average is between 20-25 degree. It is possible to live all four seasons climate in Moscow.

Pelmeni called food is similar to our mantı(ravioli). Placing mushroom,chicken or meat inside the dough, boiled, which is slightly larger than mantı(ravioli).

The most famous of the Russian and Moscow soup of cuisine is Solyanka. It is a spicy soup made of meat or fish which is more intense than our soups.

Zakuska is a snack plate in Moscow served before meal. Zakuska that generally consists of pickles, pickled beets, fish and pickled beets. Pirojiki is small salty rolls, kind of snack, usually sold in the subway entrances.

Bev Stroganov is a famous meat dish of Moscow kitchen. Veal steak with mushrooms sauteed and cooked. It is like the saute meat of our cuisine.

Tourism, Culture and the Arts

With its Red Square, St. Basil's Cathedral, Kremlin, Lenin's Mausoleum, Moscow Metro, historic GUM shopping center and many more tourist-historical sites Moscow is one of the cities that must be visited.

Red Square; The heart of Russia, Moscow's classic place, the other name of it is"Beautiful Square". This square has been the scene of all social and political events of Russia's past. Which occurred on the UNESCO World Heritage List, it is spread over an area of approximately 70,000 square meters. On one edge of the square there is historic GUM shopping center. In the other corner of the square are the St. Basil's Cathedral.

Kremlin Palace; Founded in the 12th century Moscow River, the Kremlin for centuries has been a symbol of power in Russia. Kremlin in Russian refers to "the castle".

Located in the palace of the Kremlin, Ivan the Great Bell Tower, another historic structure construction was begun in 1505 and completed in 1600.

But after a great fire damaged the bell fell from the tower, where it has fallen it had been repaired and was left in a part where the second fire broke again. Known as The Tsar Bell, is the world's the largest bell-shaped sculpture in the world.

Lenin's mausoleum; This tomb in Red Square, and inside there is a pyramid-shaped granite Lenin's embalmed corpse.

Moscow Metro; It is one of the world's oldest and largest subway. This metro, which can be considered as a tourism resource for Moscow is visited by thousands of tourists every year. An important refuge during World War II and used as a center the Moscow Metro, in terms of interior design and decoration is considered to be the most beautiful subway in the world. With 182 subway station, about 9 million people to travel every day. At the same time Moscow Metro is the world's most crowded subway.

Novedeviç Cemetery; Built by Peter the Great in the 18th century, located right next to the monastery cemetery New Girl, and many famous Russian politicians, actors and footballers lies. The famous poet Nazim Hikmet Ran's body is also located in this cemetery.

Red Hill Holiday: a festival celebrating the arrival of spring. Organized at the beginning of April on sunday. Many people in Moscow prefer to marry at these days. 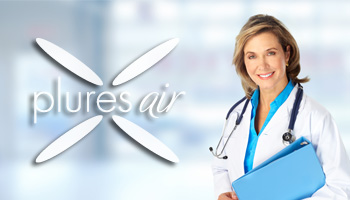 Bahrain air ambulance charter service is one of the most attentive service provided by Plures.